The Anti-Human Trafficking Unit (AHTU) of the Ghana Police Service has received six vehicles and office equipment worth 185,000 dollars from the International Organisation on Migration (IOM) in Accra.

The presentation was to support the unit in its rescuing operations in the Volta, Central and Greater Accra regions.
The Chief of Missions of IOM, Mrs. Sylvia Lopez-Ekra, making the presentation yesterday said from 2012, the IOM had collaborated with the Police to rescue 750 children from human traffickers.
She stressed the need to empower the police to help in the arrest and prosecution of culprits.

Mrs. Lopez-Ekra said IOM had been training the frontline people to help in the fight against human trafficking, adding that the donation would help support the Unit in intelligence gathering and investigations, among others.
The Chief of IOM urged the personnel to maintain the vehicles to prolong their lifespan.
The Minister of Interior, Mr. Ambrose Dery said the donation was part of five million dollars earmarked by the US government to support the effort of the government of Ghana in the fight against human trafficking over a five-year period.

“Ghana has been placed on tier two watch-list of the US State Department Trafficking in Persons Report 2015 and if Ghana did not improve on its ranking, it risked being denied US aid and grant running over $600 million per annum,” he added
He said the budget of the Ghana Police Service this year had been improved and the IGP had been directed to resource the AHTU, adding that the government would continue to support the Unit.
Mr. Dery urged the public to support the Police in the fight against the menace, saying that the security agencies alone could not address the situation.

Receiving the items, the Inspector General of Police, David Asante-Apeatu said Ghana had been considered as a source, transit and destination country for human trafficking.
He said this had resulted in a tier two ranking of the nation by the US Department of State for two consecutive years, which could adversely affect aid to the country.
He said human trafficking was a major transnational organised criminal activity which poses serious threat to humanity.

Mr. Asante-Apeatu said victims of human trafficking were often recruited and trafficked between countries and regions through deception and threats or use of force, adding that women were trafficked for sexual exploitation, forced labour and trafficking of human organ.
He said the Police Service had collaborated with key stakeholders such the Ministries of Interior, Gender, Children and Social Protection, Human Trafficking Secretariat to address the situation.

The United States Ambassador to Ghana, Mr Robert Jackson said the IOM had over the years trained 500 officials from the Attorney General’s Department, Ghana Police Service, Ghana Immigration Service and the Ministry of Gender Children and Social Protection in investigating, identifying and caring for victims among others.
He urged police personnel to work hard to enforce the laws prohibiting human trafficking in the country. 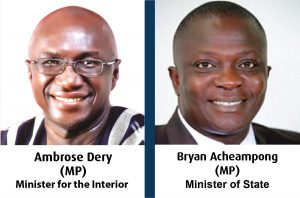